Unless you have crazy eyes, you can’t read those labels, so let me help you out: From the bottom up, we’ve got casual friends, good friends, and best friends.

Second is a more detailed breakdown, from a website called Out On Limbs. 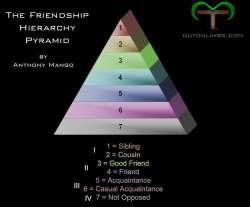 To be honest, I’m not sold on either of these.

But even of that, I’m not sure. I wondered once, on this blog, if there is a middle ground between acquaintance and friend. I think there is. I’ve met plenty of people in my life that I know too well to call  an acquaintance–we’ve hung out, we’ve chatted, maybe shared a drink or two (maybe)–but I wouldn’t go so far as to say we are friends. The best term I can think of is, simply, sorta-friends.

Oh, Dennis? Sure I know him. We were sorta friends once.

Elizabeth? I don’t know that I’d say we’re friends, exactly, as we haven’t talked in a while. But I definitely know her and we’re always happy to see each other when we cross paths. We’re, like, sorta friends.

I think there must be–or should be–a more technical term for this relationship. To me, a casual friend is someone who you see a bit more and know a little better. You are buddies. But an acquaintance is someone whose name you know. Perhaps you know her stats–where she’s from, what she does–but that’s it.

Is there something in the middle of those two friend categories? Or am I merely overthinking this?

And if there is something in between acquaintance and casual friend, what should it be called?

Filed under The Search

10 responses to “Introducing: The Sorta Friend”